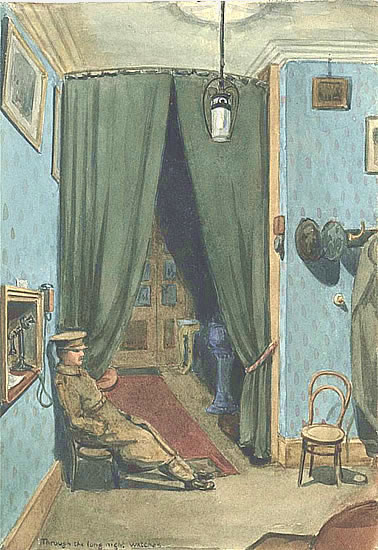 
P. J. Hill served with the 36th Company (D).  This was part of the 20th Battalion (City of London) which was a Home Front only training battalion, and was not a battalion destined to go abroad.  In each battalion there were approximately five companies consisting of 220 men of which Hill would have been one.  Their responsibilities would have been to look after local areas, together with daily training.  Some of the men would later be transferred to battalions overseas. Hill would have been well into his forties in 1915 and too old to serve overseas.
Fatigues (duties) would have been part of a daily routine - in this case looking after and protecting the landline and telephone exchange - the only means of communication -of the local Hotel where the Officers were billeted.   This painting is likely to date to  February 1916 on the basis of other known works by Hill..